VMware gets serious about multi-cloud (VMworld 2017 – European Round Up)

Servers, Storage and Networking | Posted on September 22, 2017 by Tobin Dalrymple

While IT pros were still catching up on the big VMware event in Las Vegas, the company was unveiling a whole new series of multi-cloud updates and new products on a stage in Barcelona, joined by some of the world’s biggest technology partners like IBM.

What emerged from the European edition of VMworld was even more stark evidence that VMware believes in a world where multi-cloud and hybrid cloud enterprises are the norm, not the exception.

VMware giving more freedom with any cloud to any cloud portability

On the first day of VMworld Europe, VMware announced the debut of its Cloud Provider Platform and a number of new technologies that will make it easier for service providers and cloud partners to cater VMware Cloud Infrastructure services to their clients’ needs.

As part of the Cloud Provider program, the big piece of news was the initial availability of VMware’s HCX technology – a piece of software that essentially allows enterprises “any cloud to any cloud” secure, seamless interoperability and mobility, enabling large-scale application migration and ongoing portability with zero application downtime or refactoring. 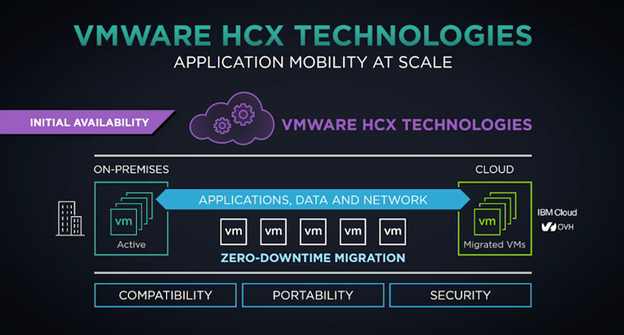 Initial availability of HCX is limited to customers of IBM and OVH cloud services (IBM was also a key design partner). The Cloud Provider program also includes a new accreditation called “Cloud Verified” to mark trusted partners, which currently includes OVH, IBM Cloud, Fujitsu, CenturyLink, and Rackspace. This “any cloud” approach is in line with key announcements made in Las Vegas, particularly with AWS support.

The bottom line is that enterprises will be free to choose from a wide variety of cloud providers, all offering out-of-the-box, native VMware virtualization functionality. Enterprises will also be able to mix and match different providers for different use-cases — giving you more bang for your buck and more customized services based on individual workload needs.

Strengthening security for the multi-cloud world

VMware announced big additions to the VMware vRealize Suite – which is the company’s cloud management platform to deploy, operate and manage IT infrastructure. The new version features an innovative lifecycle management function, which will help users by simplifying daily administration and operations of the suite by automating Day 0 through Day 2 tasks. This will help customers speed time to value by automating the deployment, configuration, and upgrading of the products in the suite.

Also announced was the addition of six new partners to its Mobile Security Alliance, which is a broad ecosystem of security vendors, deeply integrated into VMware’s Workspace ONE platform. The program helps bridge the gap between existing legacy security tools and gives organizations a head start in securing against targeted threats across devices, users, apps, and data, both in the cloud and on-premise.

If there was any doubt left that Network Functions Virtualization (NFV) was ready for mass enterprise adoption, that was flushed away in Barcelona. VMware announced Vodafone – one of the largest telecommunications providers in the world — has agreed to a major software licensing agreement to leverage VMware’s NFV solutions.

While Vodafone is looking at the deal as a strategy to ensure it can continue to grow, and reduce costs while it tackles 5G rollouts, it is a positive indicator to all enterprises considering software-defined networking technologies.

We saw similar signs of VMware’s new embrace of open tech in the Las Vegas event a few weeks prior when VMware announced the launch of Pivotal Container Service with Google Cloud to bring Kubernetes to Enterprise Customers.

If you would like to get a detailed breakdown of all the biggest news coming from the VMworld events in Las Vegas and Barcelona, watch the latest recorded webinar conducted by Softchoice experts. Watch now>>>

Get technology trends, insights, success stories and other helpful resources from Softchoice every month.

In collaboration with Cisco. If you’re prioritizing the acceleration of remote work right now, how are you delivering fast, spread out and great experiences every time? Coming out of the acute crisis climate of COVID-19, many organizations faced the struggles of forced change, but also found some upside in the disruption. Now is a time […]

In collaboration with Veeam.  Whether or not you agree that OK Computer, the third album by the English rock band Radiohead released in 1997, deserved its critical acclaim, know that the Library of Congress had already deemed the album “critically, historically, or aesthetically significant” when it was included in the National Recording Registry in 2014. […]

The Softchoice Virtual Discovery Expo (VDX) 2020 has now wrapped. Over 2,000 people registered to hear from Softchoice and our exhibitor partners about the areas driving their digital transformation today. This year, our full-day virtual tech expo happened in a much different context than the inaugural event in 2019. Attendees took away an important message: […]